Dirty Dancing is one of those films you’re always shocked to find out people haven’t seen, this year it celebrates its 30th anniversary and this week a number of cinemas are showing this iconic movie once again.

Not even the stars Patrick Swayze and Jennifer Grey could have predicted the phenomenon that Dirty Dancing would turn into, here are some little-known facts about this iconic movie, which grossed nearly $215 million worldwide.

How the story was created

Eleanor Bergstein wrote the script and produced the film, and she based the film on her own life. She is the daughter of a Jewish Doctor, they summered in resorts similar to Kellerman's at the same time. Her sister is even called Frances, which is Baby's real name in the film.

Whilst in college, Bergstein actually worked as a dance teacher, and she says she knew the traditional steps as well as the 'dirty' ones too. Johnny is said to be based on a dancer that the writer knew in Brooklyn too.

In an interview with AFI, Swayze said the film is still popular because it has a strong heart. It's more than sensuality, it's a story about trying to find yourself.

The cast that could have been

Val Kilmer turned down the chance to smoulder on the big screen as dance instructor Johnny Castle, opening the door for Billy Zane. Sarah Jessica Parker also auditioned for the role of Baby.

Jennifer Grey had five minutes to convince producers she could play 16-year-old Baby, she was 26 at the time herself. And she obviously managed to do so.

Swayze was 34 when he played Johnny too, he wasn't really the first choice. But there was no chemistry between Grey and Zane, so Swayze landed the part and the role was changed from an Italian character to an Irish one.

Lynne Lipton started filming as the role of Baby's mother, but when she got ill and couldn't continue the role moved on to Kelly Bishop. She was already cast as Vivian Pressman, the resort's well-known cougar. When Bishop took the role, Pressman's character was then given to an assistant choreographer who was working on the film.

The criminal mastermind Mrs Schumacher was originally supposed to be played by Dr Ruth, Bergstein's friend, but she said she wouldn't play a thief.

The film was considered for a straight-to-video release because the test screenings were so negative.

Clearasil were interested in becoming a partner of the film as a means of promoting it and targeted acne-prone teens, but they wanted the abortion story to be cut from the film and Bergenstein wouldn't budge.

The film was actually shot in October, so when Baby and Johnny are in the woods the leaves were spray painted green to make the setting more realistic.

Swayze was adamant he wouldn't have a stunt double for the film, and it resulted in him injuring his knee during the log scene.

During the iconic lake scene where they practise the lift, there are no close-ups of the actors. It was so cold, the actors' lips turned blue.

Not in the script

The very famous scene where Johnny and Baby crawl towards each other wasn't supposed to be part of the film. They were just messing around, but the director liked it so much he kept it in the film.

The scene below where Baby is laughing as Johnny runs his hand down her body, it was all real. Grey was extremely ticklish and Swayze was annoyed that she couldn't get through the scene. 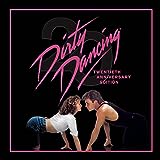 Director Paul Feig has took to Twitter to reveal the …
January 28, 2015